A mouthful of sky – a series about life, emotions and being there with each other during tough times 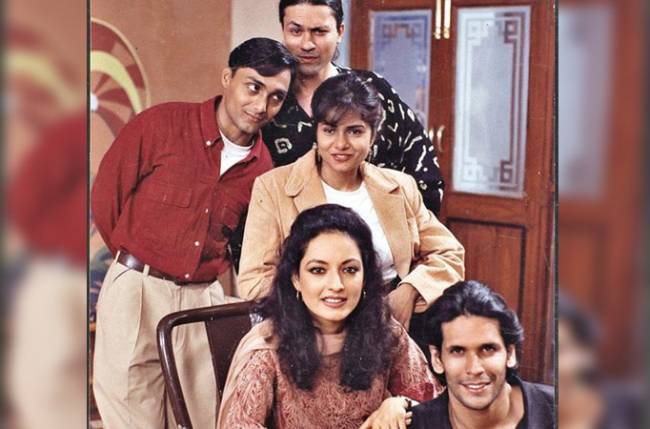 India’s first daily English soap was aired on DD3 in August 1995. A Mouthful of Sky was written by novelist Ashok Banker, and produced by Amit Khanna of Plus Channel, the series casts models Milind Soman as Akash Bhandarkar, Rahul Bose as Pavan, Ranjeev Mulchandani as Prithvi Raheja, Simone Singh, Ayesha Dharker, Samir Soni and Kushal Punjabi.
The show was directed by Anant Balani, Ajay Goel and Mahesh Bhatt.
The series revolves around a group of friends who pursue MBA and are batch mates and they all meet at a re-union after 12 years. The Managing Director, Plus Channel Amit Khanna who produced the series had attempted the daring feat of producing the first English series on Doordarshan.
The opening of the show depicts the five friends busy in their professional lives. As the days progress they are faced with many life changing events. In one of the episodes the group learns that their rivals in the college are conspiring and plotting to destroy their friendship by turning them against each other.
Overcoming all the twists and turns in the plot, the friends are seen sharing close moments with each other. The maturity possessed by the five of them equips them to turn negative situations into positive ones despite the manipulations they face. This maturity level was the USP of the coming of age drama. The soap also mirrored the various cultural differences between the urban and Indian culture.
A mouthful of sky is a show that is relevant even in today’s generation.
It depicts ups and downs in life faced by the young generation in life. It also compels the audience to think how students tend to take life for granted. The meaning of life reveals itself when we get matured friends like the ones in the series who have the determination to hold on to each other even when the going gets tough.