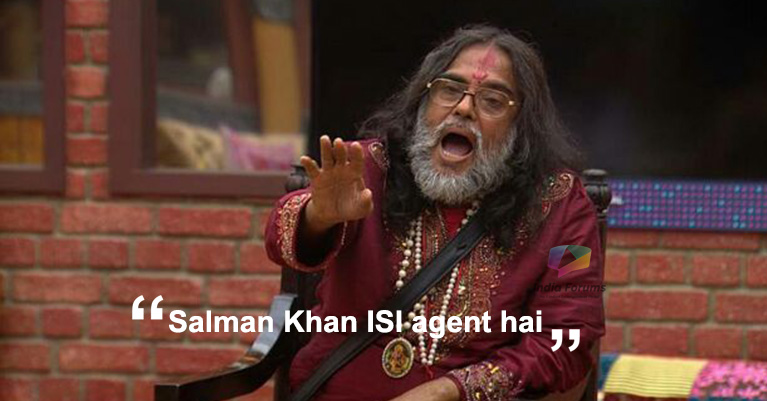 Om Swami’s ouster from the Bigg Boss house grabbed more headlines than the show itself. He was thrown out of the show after he threw his pee on Bani and Rohan. The double-faced fake God-Man, has a talent of changing his statements time and again and we’ve all seen it in the show.

But Om Swami is now leaving no opportunity to grab the headlines and media attention with his sensational statements.

Not stopping here, Om Swami has gone on record and said that he will beat up host Salman Khan and sabotage the grand finale of the show if he is not called back on it.

And now, Om Swami is ready with a different set of claims. Om Swami says that Salman Khan and the makers are now ‘pleading’ him to come back on the show. According to Swami, the 10th season of Bigg Boss was fetching TRPs only because of him.

And with him being thrown out, the show’s TRP is apparently ‘0’ and hence, the makers and Salman want him to return to the show as a wildcard.

Om Swami is even willing to go back on the show, provided, host Salman Khan rubs his nose on his feet and apologizes to him at a press conference that he is holding at the Press Club of India tomorrow, i.e 10th January.

He called Salman a traitor and threatened to beat the host up ‘black and blue’ and sabotage the finale if he is not called back. He also clarified that he will not ‘kill’ Salman, but torture him.

For someone, who claimed to have given his all to the show, the moment Om Swami stepped out of the doors, he called Bigg Boss a ‘fraud’ show. And since then, his claims have just not stopped.