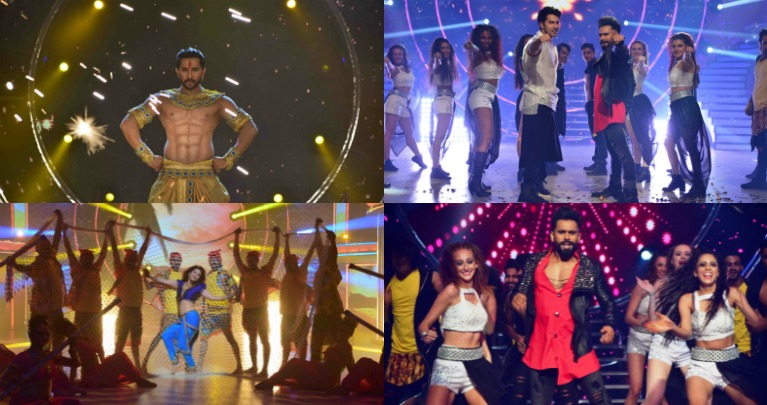 The Grand finale episode of &TV’s So You Think You Can Dance is going to be nothing short of spectacular. The latest we hear from the sets is that judge Madhuri Dixit will be seen performing a medley of songs which will see her paying tribute to her one-time rival Sridevi.

Madhuri will be seen performing to some popular chartbusters such as ‘Deewani Mastani’, ‘Humko aaj kal’ amongst others. But the moment of the show will be when the diva will be seen paying tribute to another diva – Sridevi, and dance to her popular number ‘Meri Haatho mein nau nau choodiyan hai.’

A source from the sets says, “Madhuri’s performance was exceptional, the entire set couldn’t stop applauding after her performance. She sizzled the stage with her graceful dance moves and she looked very elegant in her attire and made everyone’s heart go ‘Dhak- Dhak.’ The performance was one of a kind since the Dancing Diva was giving a tribute to the Bollywood Heroines.”

We can’t wait to witness the magical performance of the timeless diva!

Also, talented choreographer, Terence Lewis, who is now-a-days seen as a judge on the show is undergoing some strict fitness training. The training is for his act in the finale of the dance show. He will be seen dancing on the chartbuster number ‘Malhari’ from Bajirao Mastani.

Speaking about his training Terence shared, “Though I usually follow a healthy diet, I thought my abs need to look toned so I have been training for extra hours since the past three weeks. It is necessary for the look and the feel of the song. I hope the audience like the end result.”

Ace Bollywood choreographer Bosco Martis who makes everyone dance to his tunes will be seen dancing to the steps choreographed by none other than Geeta Kapoor. Bosco, who performed on stage after 14 years, gave a one-take performance. He danced on his own hit numbers from ‘Dus Bahane Karke Le Gaye Dil’ to his latest ‘Sau Tarah Ke’ from Dishoom. The power packed performance also saw Varun Dhawan join his dancing mentor on stage.

Talking about the performance, Bosco Martis says, “It was amazing to perform on the stage of So You Think You Can Dance. I have performed on stage literally after 14 years. The vibe was completely different and I totally enjoyed it.”

This surely will be a hell of a gala event!