Not taking jobs of singers: Yuvika on her singing debut 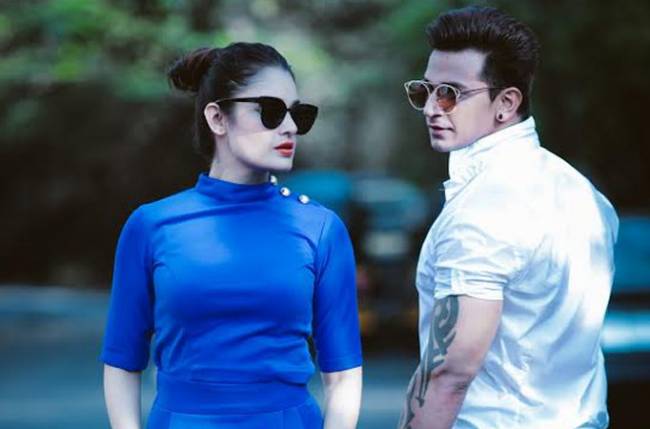 ormer contestants of Bigg Boss, and rumoured love birds Prince Narula and Yuvika Chaudhary, recently launched their a new music video tilted ‘Hello Hello. Apart from crooning the melodious song, they are also part of the video.
In a candid interview with , Yuvika spoke about the music video and her upcoming projects.
When asked what made her say yes to the project, she answered, “I like his (Prince) confidence (looks at Prince gushingly). He has proved everything that he has said, and when he asked me to do this, though nervous, I said yes. I have 100 per cent faith in him and I knew he wouldn’t let me falter.”
Yuvika further added, “It was our first production and it was very difficult to manage everything. We have cried during our shoots. We have had hectic schedules but it was an amazing experience and I’m sure people will like it.”
Referring to the recent debacle on whether actors should sing or not, she said, “People should do things that make them happy. And about the debate, we don’t want to make singing our profession, and we’re not taking someone’s job, it’s just a hobby. If people are loving and appreciating it, it shouldn’t be a problem for singers.”
We further asked her about her upcoming projects and she shared, “I am currently shooting for two films; one is Veeray Ki Wedding (with Jimmy Shergill), and the other one is yet to be titled. I want to do TV but unfortunately I have date issues. However, I’m happy doing whatever work I have right now.”
When asked to describe Prince in one word, she smilingly replied, “There’s only one word for him-And it’s Prince. As he always says, there’s only one Prince and there’s always going to be one.”
For the uninitiated, the music video has been launched on 17 May on MTV Beats. Here catch a glimpse of the same:Keep visiting this space for more updates.