Bigg Boss 11: A big TWIST in this week’s eviction 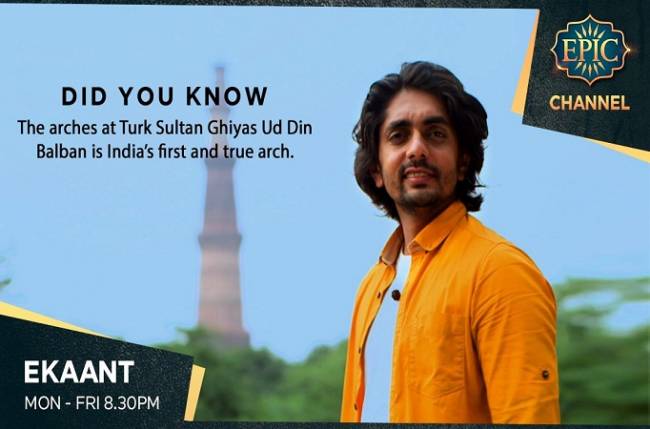 Akul Tripathi is not your average Joe. He has been a part of many things. The young man has a different perspective and it comes out when one is in a deep conversation with him. Akul has worn many hats till date, he has been an actor, he has done fiction and reality shows and has a deep understanding of the medium. His pensive looks, tall frame and his intense gaze makes him the perfect host for the travel show Ekaant. The show takes its viewers on a journey across abandoned historic locations throughout India.
Being the host of the show which has such a deep historical and philosophical connotation, it is more than evident that Akul is the owner of a deep philosophical bent of mind himself. A traveller at heart, mind and soul Akul is the writer for the series as well. His commentaries make sure that every episode of the show makes a lasting impression on its viewers!
And he is a store house of memories and eclectic experiences over the years that he has been writing and hosting the show for the Epic Channel. Enough to probably write a book (Akul are you listening?)
Sandip Pal got into a conversation with Akul earlier this week. Excerpts from the interview :

After Saans you never did a full fledged TV show, we saw you in bits and pieces in some films but never quite a meaty Akul Tripathy role came up. Why was that? Was it a dearth of scripts or was it something else?
Well, good scripts are always a part of it, besides that, let’s just say, I have too many interests, when I satiate one, I jump on to the other. It becomes a circle. After Saans, I did Son Pari, I went abroad for my education, non–fiction excited me which is why, I did KBC and then I did a little bit of acting again and it was an off and on process. To put it succinctly, I did what excited me. It is the journey that matters to me more than anything else. For me it is not a specific career move.

Channel epic has taken you places, literally so. Were you always a traveller?
I founded a travel start up with some of my close friends in 2010; it was a weekend getaway portal of sorts. I was a student of Wilson College and we had one of the most active nature clubs in India. We made sure to make two big travels every year. All the places I visited with Ekaant, are places I have been to before which is why I knew of them. So yes, in a way I was a traveller even prior to time Ekaant happened to me.

How was it different when you had EPIC to back you?
As I said, the passion for travelling was inculcated in me while I was at Wilson and that translated into a lot of other things. The EPIC Channel’s support made sure that I was able to host the show where I could travel to a lot more places and telecast it as well. Which is why, many places which were there on my bucket list were covered. Also, when you are searching, a lot of new things come out; sometimes you don’t really have any idea of it. And then people start sending suggestions of places and now there are a plethora of options and even if I continue with this for the rest of my life, I will not be able to finish all of it.

When you are visiting these places, there are a lot of historical connotations attached to them, but while you are exploring these places, it is not just the words and pictures in a history book that becomes alive all of a sudden, there are a lot of other characteristics that come in play – How do you deal with that?
I am a stickler for writing up to a T; I don’t want to be surprised at what I come across over there. But somehow when we are in the place, the openings and the endings are changed because there is a dimension of the place that comes alive which one can’t visualise or imagine. It might be the smell of the place; it is something inexplicable. There is something beyond the normal feel when you go to a new place. It does speak to you in a very subtle way and that is when you realise, it didn’t occur to you when you are sitting and writing the script in Bombay. Therefore, it is a unique feeling. You have to be there to experience it, words can’t describe it.

So it wouldn’t be an exaggeration to say that this has enriched you a lot?
Totally! On all fronts, be it knowledge wise or understanding of what the country might have been like. When we are sitting in the 21st century in an air conditioned room, we barely realise all of this. But when you sit in utter seclusion and ruminate about it, you realise that it has been a sum total of efforts and experiences of so many generations that has led us to whatever we are today and so somewhere it is our responsibility to add on to it. Having said that, it sometimes perturbs me to think, today when we are witnessing the heritage monuments strewn across the country and we feel proud of what our ancestors have left for us, are we really doing something worthy so that fifty or hundred years from now, someone would look back and be proud of what we did? I don’t know where have we come to? What is all this technology? Are we doing justice to the legacy that we have?

When you come back to the city after being a part of that world which is away from the humdrum and monotony of our daily lives – What is the difference you infer as a traveller between the two worlds?
The first thing that hits me when I come back to the city is the NOISE! There is a lot of useless cacophony all around. It startles me, something within shakes in me, at times it becomes so deafening that you cannot hear yourself. Especially, if it was a long trip and you come back, it takes a good two to three days to get to the normal zone of even talking. That is again because you have become used to silence! When I am shooting, I have to say the lines but besides that there is a large amount of time when I am not speaking at all because there is nobody to speak to. Even the process of my mother asking me questions becomes irritating. The places have their own hangover. Fortunately for me, I travel a lot and it is more like a retreat, I have to go. However, it is not an escape; it is more of an addiction as far as I am concerned. For me I LIVE there, I just come here once in a while because I have to.

We have seen you visit seegiriya in the show, how has it been?
Surreal! All of us have heard about Raavan Ki Lanka from our childhood? Seeing that place come alive was a different experience altogether.

Besides the Raavan folklore which is a vital part of the Indian mythology, there is also a vivid history attached to the place. It is known to belong to the Kashyapa dynasty. We have heard about the Raavan folklore from our childhood but while growing up we do juxtapose the history with belief. In this case which one was more overpowering, given the fact that there is a very thin line between the two?
Well, I too have had these questions in my mind when I was shooting this bit for Ekaant and had them otherwise as well. However, the way I see it is, Mythology is unverified history. Therefore the big question that arises here is what do you consider history and what do you not? In the Indian context, if there are documents in place and people have written about it, it becomes a part of history, but on the contrary if one tells you verbally about the same place, it might just end up being a figment of one’s imagination, a story but NOT HISTORY. Therefore, it is difficult to differentiate between history and fiction. It all boils down to belief. If I believe in something, it holds true for me and that is it.

Well, this viewpoint of yours is very much semblative to a simple Bhagavad Gita ideology which says, something that you consider right is right for you; it might or might not be right for the other. Stick to what you believe in. This indicates that somewhere deep down you are philosophically inclined as well
I think all religions stem from philosophy. It is more like that parable – if you have just heard about a tree falling in the forest, do you believe in it? Because you haven’t seen it, you have just heard it. Therefore especially when I am doing a show like Ekaant with Epic, there has to be some sort of basic journalistic ethos that has to be maintained where you leave your personal bias out.

But then some of the best journalists are unable to do that at times.
That is because at the end of it all, you are human. You are building a show because you are connected to it. But you should at least try to be fair enough to bring out both the sides, lay it bare in front of the viewers and let the viewer decide. So I don’t know whether Sirigiriya is the Raavan’s lanka we have heard about but there are people who believe it. So we have to put both the facts out there.
The episode too ends in the same strain “App kis par Vishwaas karoge? Itihaas par yaa lok kathaao par?” (What would you prefer to believe in, history or folklores?) This has been the stance of Ekaant right from the very beginning. In the very first episode we shot, we asked a very pertinent question, “Itihaas Kya hai? Jo itihaaskaar likh gaye hai, woh, yaa woh jo us jagah ke log samajhte hai aur jaante hai?” (Which is history? Is it what the historians have written about or is it what the inhabitants know and understand about the particular place?) The show has always left on the note of “Aap jo Mehsoos Karo, wohi aapka hai.” (Whatever YOU feel is right is right indeed!)